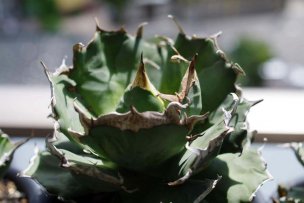 About how to grow agave of succulent plants where you can enjoy sharp thorns, various types of spots, and individual differences. It explains the growth rate of Agave, watering and summer management, winter management, replanting, and more. Also known as RYUZETSURAN (japan). 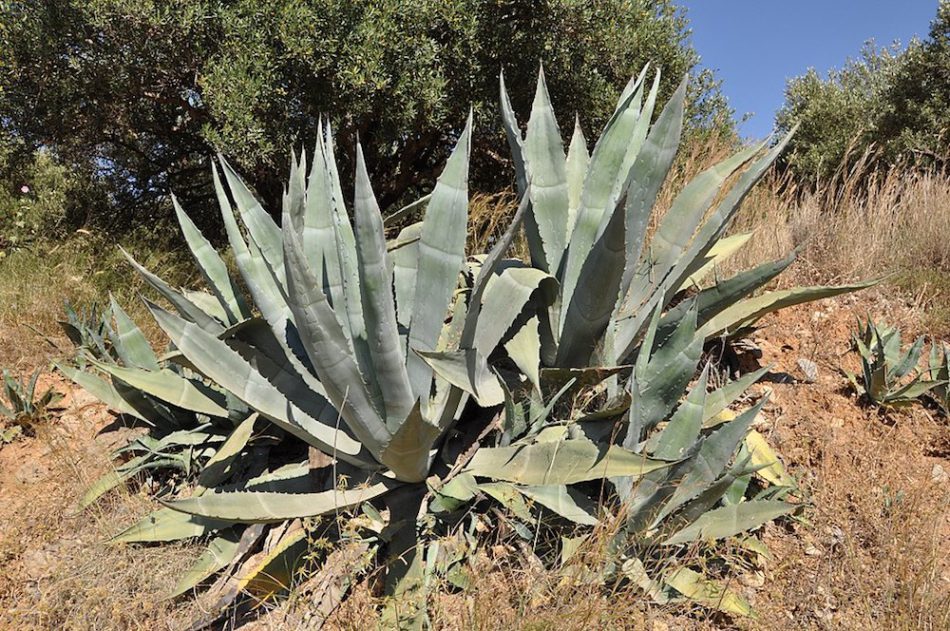 There are more than 100 kinds of Agave.It exists from the very big one to the compact one.Mainly native to Mexico.

It is said to bloom once every 100 years, but in fact it seems to bloom in decades when grown in large potted plants and ground plants. Flowering is difficult if you are growing in a small pot at home. When flowering, the strain dies by leaving the child strain and the seed.

You can see “Aonoreuzetsuran” which grew up greatly in the town, the park, and the theme park in Japan. There, such as flowering strains can be seen normally. It is a succulent plant that is fun even if various features come out and collect even in the same kind.

As edible, and agave syrup that has been attracting attention in health-conscious as a recent low GI value, or become a raw material of tequila of sake.

In the viewing application, a beautiful rosette (leaves expand radially) is formed, and there are beautiful types such as the type of thorn and how to enter the plaque. In addition, there is a thing that gathers compactly from those size is also large, those that become compact are preferred horticulturally.

The following types are easy to obtain, compact, and easy to grow, and they are often seen recently in dealers and auctions. There are various beautiful kinds, but recently Titanota is very popular, and many of the characteristics are sold mainly imported.

Things to keep in mind when buying Agave 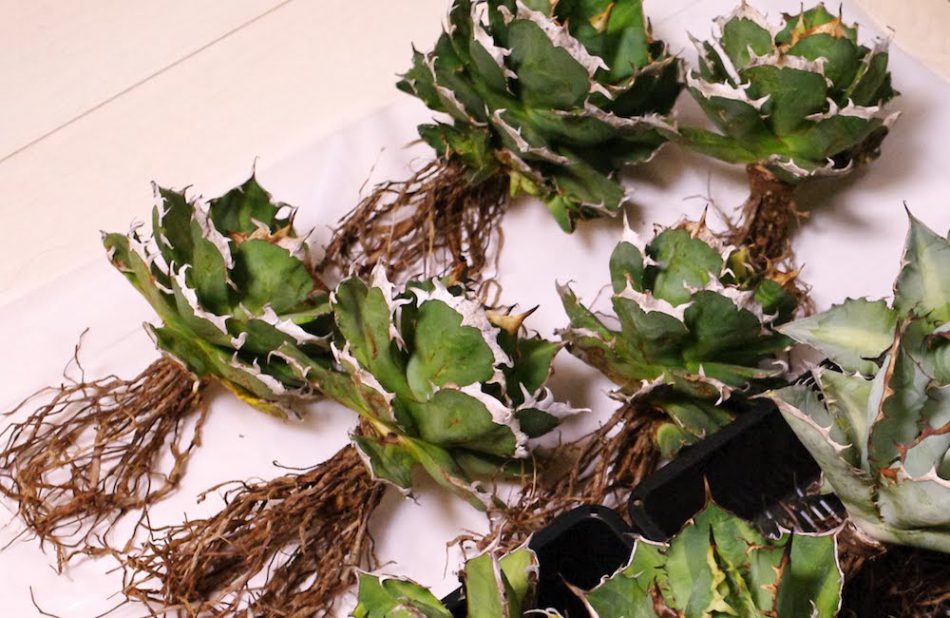 Agave sells many imported stocks (without bare roots and roots) in private transactions. It is Agave that grows without withering even if there is no root, but it is better to be careful if you have never grown it. If possible, if you want to buy for the first time, it is good that it is grown in a potted plant and has roots.

The price is very high compared to the past, but because it is a kind that is easy to grow among succulent plants, I feel that the price will settle down sooner or later. It is recommended because it is cheap and beautiful Agave, such as Agave potatorum ‘kisho-kan’ and Agave potaroum ‘ohi-raijin’.

About the temperature suitable for Agave 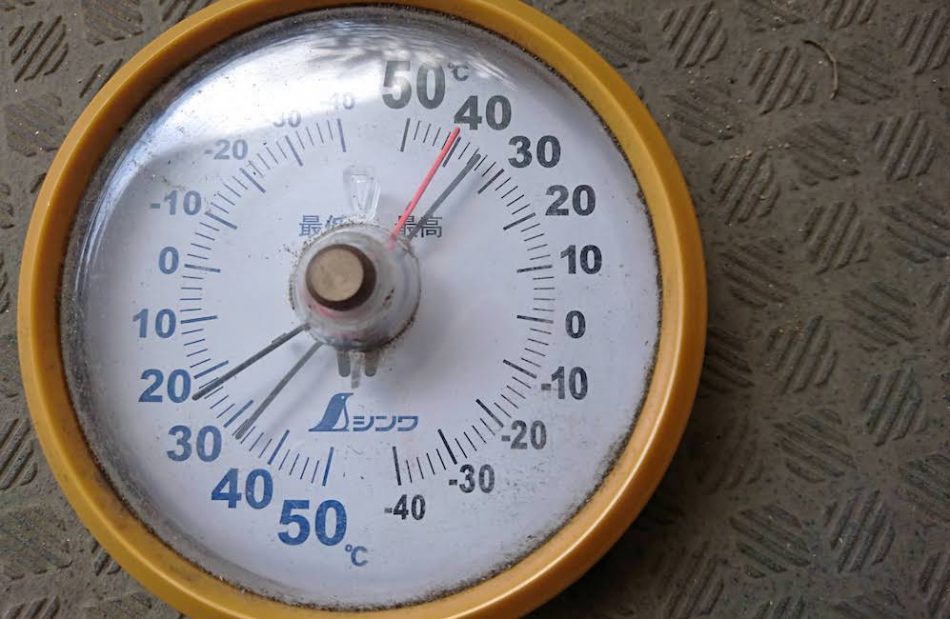 Mexico has a relatively mild climate. Agave grows warm. Winter in Japan is often severe, but there are many types that are resistant to the environment. There are some species that grow up in Japan by open-air planting, but there are many kinds that are sensitive to cold in the kind that are grown for gardening. If it becomes less than 5°C depending on the type, it is good to take.

Because there are many types that endure up to about 0°C, it is better to check in advance or manage while looking at the finely state, but when it is applied to frost or snow piles up, it is taken in.

There is a case where a part of the leaf withers by cold damage when applied to the cold, also there is a case that withers from the outer leaf when or applied to frost. Even if that happens, if the growth point of the center is alive, it will grow from early spring. 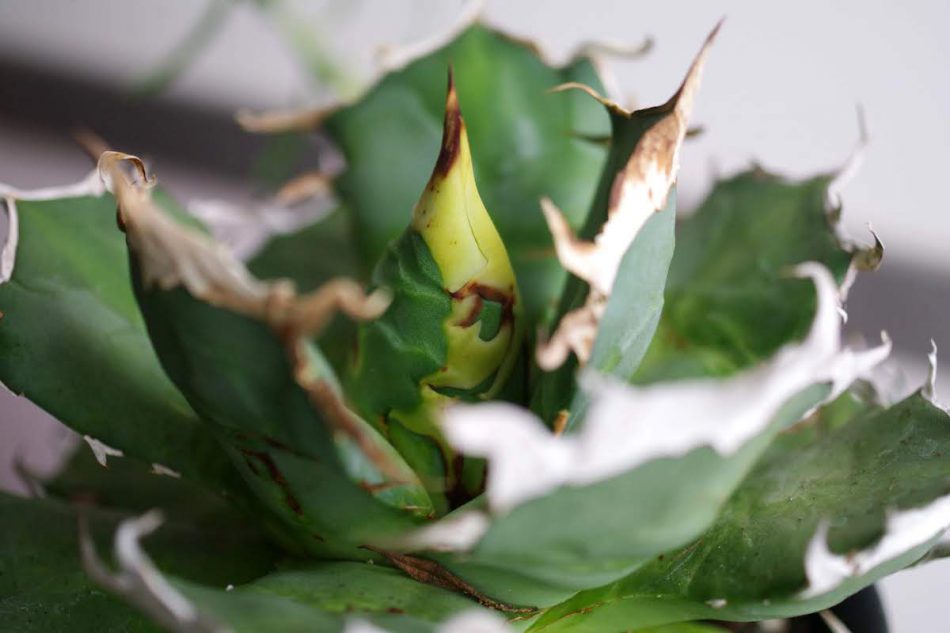 Although Agave is a summer type, tropical nights, which are more than 35 °C and do not fall below 30 °C at night, like in Japan, humidity environments seem to be weak and do not grow much. It is often the case that growth resumes in September, when the temperature difference between daytime and nighttime increases below 30 °C. Japan’s short spring and autumn will be a valuable growth opportunity for Agave.

Management and watering of spring, summer and autumn in Agave

Agave grows when the temperature is high, so when it gets warm, it gives water to the sun as much as possible. In Mexico, where it is produced, it rains about the same level as in Japan from spring to autumn, so it is relatively resistant to dryness, but when the topsoil is dry, it is given plenty of water.

Winter Management and Watering in Agave

For winter management in Agave, Agave is given a few days after the surface is dry, as growth stops when the minimum temperature falls below 10 °C. If it is possible to take it in the room because there is a possibility that cold damage comes out in the weak type of cold resistance when the minimum temperature falls below 5 °C, it is safer considering winter. If it is the temperature, there is no problem even if water is cut.

Keep indoor management in a sunny place as much as possible. You don’t have to water it, but if you’re growing, you can give it a little. I’m cutting water.

The heat in Japan is hotter than that of the origin, but I have not heard that Agave withered in the heat, so it is more likely that it dies in the cold. In the place of origin, there is little rain in winter, and it is also good to cut off water to prevent root rot because it is resistant to water ingress. 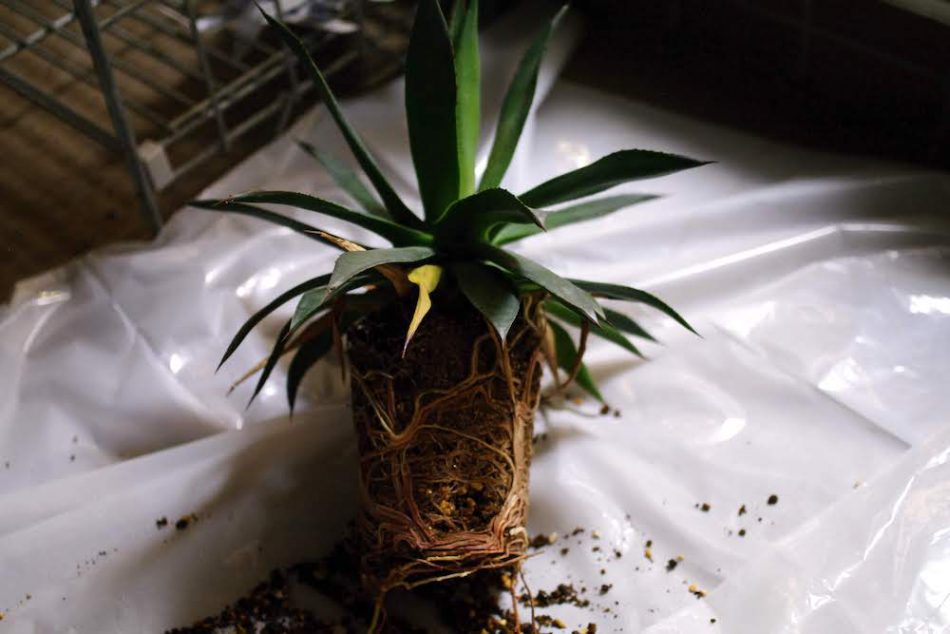 Agave is vigorously rooted. It is preferable to replant in about two years in a stock that grows early. If you grow it in the same pot for more than three years, it may cause root congestion. Growth is also inhibited. Regular replanting is required. Since basically the size of the strain at the time of replanting is increased around or twice, it is better to replant in one size large pot (pot increase).

Since there is a characteristic that the roots stretch deeply against the soil, it is good to plant in a pot with as high as possible. Then, the capacity of the soil increases, too, and time until the root jam can be earned.

The timing of replanting is spring before starting to grow. If possible, we would like to replant before growth begins. Because there are no deciduous leaves, it is possible to replant relatively throughout the year. In the middle of summer, stocks are also in the heat, so I’d like to refrain from doing so. I want to refrain from rooting because it does not grow in winter. It is possible to replant autumn, but if possible, I want to be rooted before winter.

The root which can be taken is not possible to remove it, but the movement after replanting seems to become dull if it is removed too much. You don’t want to do as much damage as possible with the white roots. It is better not to replant to cut to the root which is alive like a cactus, but to increase the pot so as not to damage the root too much.

On the soil suitable for Agave 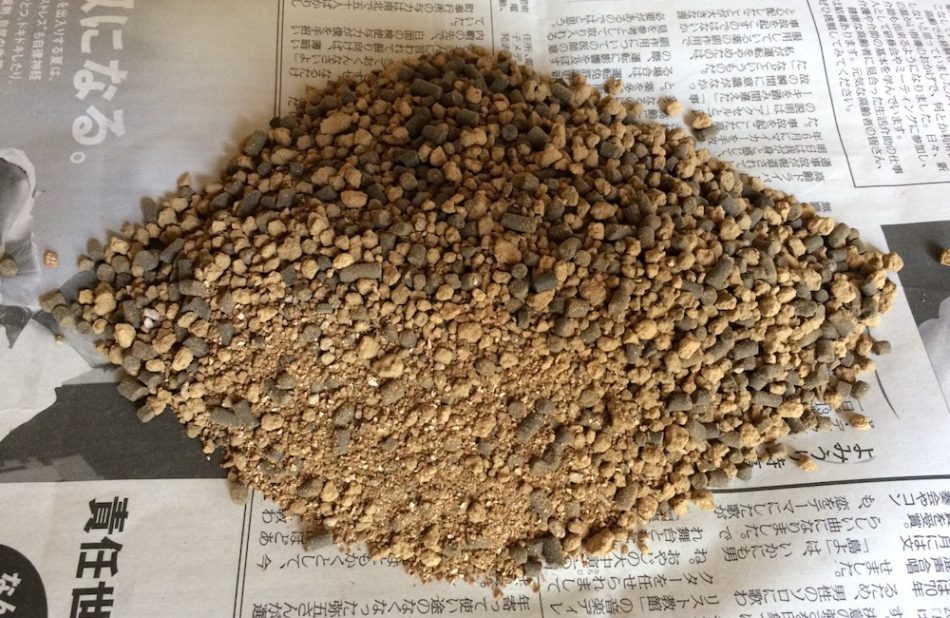 On the soil suitable for Agave

It seems that anything is good if the soil is well drained, and the root is properly put out. It grows without problems in the culture soil of succulent plants that are generally sold. I want to choose the soil for which the water is good.

In Japan, ‘AKADAMA-TSUCHI’, ‘KANUMA-TSUCHI’, and ‘KIRYU SUNA’ are used as basic soil.

About Fertilizers in Agave

If you make tightening, keep the fertilizer low. In addition, organic soil can be made (tightened and raised) if it refrains from watering modestly. It will be seen while seeing the situation because it withers from the lower leaf when water comes off.

About sunshine and storage 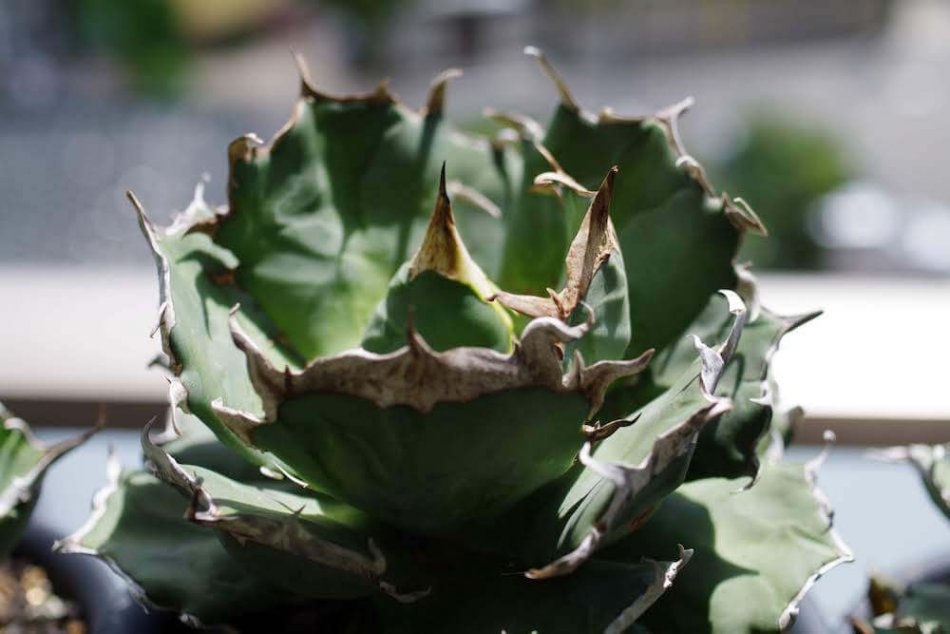 Agave is not very negative and wants strong light. It will be difficult to grow it as a houseplant in the room. If possible, it is better to put it in an environment that is exposed to direct sunlight for more than two hours. Because there is a case where such as the type of plaque entering when exposed to the west sun causes a leaf burn, such as a device of the storage place is carried out, and in some cases, such as light shielding is carried out. In addition, I want to improve the ventilation though it can be said in general succulent plants.

If you shine more than two hours of sunshine, I think that many kinds can be brought up properly and energetically. It is not suitable for indoor training. In winter, it is better to take it indoors because the temperature drops, but even in that case, it is better to ensure sunshine. When water is given, make it as airy as possible and apply it to the sun.

Diseases and Pests in Agave

There are not many pests, but during the rainy season, there is a lack of sunshine and humidity. As soon as you find it, remove it with a wet tissue or toothbrush. In rare cases, there may be a variety of cichophysins in the vicinity of the growth point. Please remove it as soon as you find it as well.

How to increase Agave 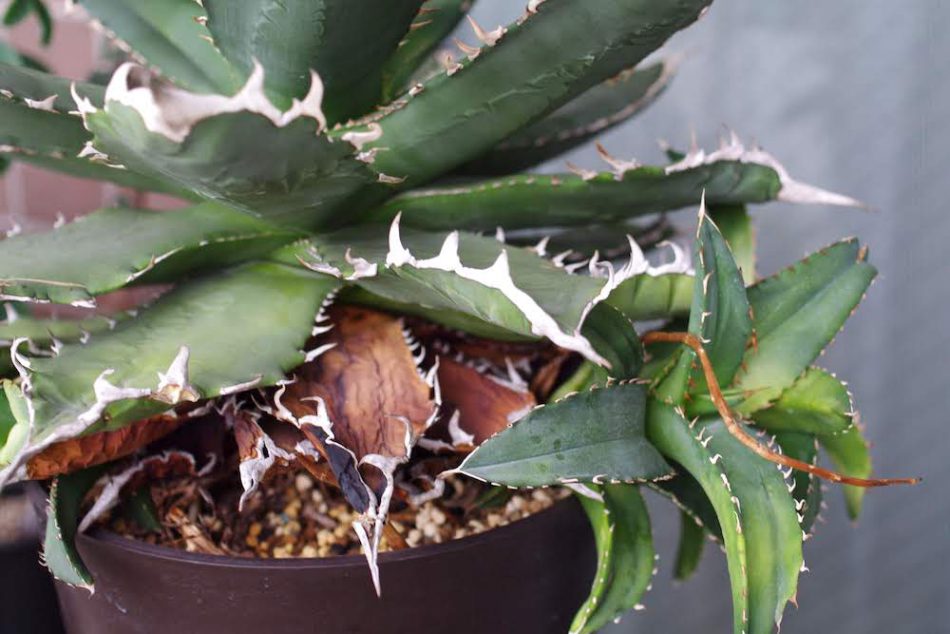 If it is a healthy strain, the child strain grows from the vicinity of the root every year. It can be increased by removing it from the parent strain at the timing of replanting and growing it alone.

If you remove it from the parent stock, it may be taken naturally. In addition, it may come off if you put a little force. When cutting with scissors, it is done after properly disinfecting, but if it can not be taken naturally, there are many cases where the child strain is not growing yet, so it is often better to plant it while attaching it.

In Japan, agave does not bloom so much and seeds cannot be collected, and the type of plaque is not so good as the kind of plaque strains as a horticultural variety, and the availability of the seed is not so good, but those close to the original species can also be imported and grown. However, please note that many of the species we deal with are larger types.

I grow plants in Japan. cultivated for about 20 years. twitter

This site is a gardening information site in Japan.